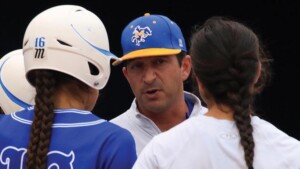 Over a two-day period last spring the McNeese State softball program jumped into the national spotlight.

Back-to-back wins over high-profile and nationally-ranked Notre Dame did more than just move the Cowgirls into the Evanston Regional championship.

The victories made McNeese the softball tournament’s Cinderella story.

“They gave our program great exposure,” said McNeese head coach James Landreneau. “But what we really want to do is win a regional and become relevant as a softball program nationally.”

While the Regional title might still be unfinished business, the Cowgirls are more than relevant.

Heading into the new season that is now just days away, McNeese has earned a position in the sport’s spotlight.

The Cowgirls found out they were ranked as the No. 42 program in the nation according to D1 Softball in a poll recently released. It is an honor years in the making.

“It is humbling to know where our program has come and it is a testimony to all the great players we have had before us,” Landreneau said. “It’s nice to be respected by your peers and to be noticed nationally.”

“I think it’s great for our players to see you know the work they’ve been putting in and it’s getting recognized publicly so we’re excited about it, it’s nice to be mentioned. “Ultimately, that’s what you want to do, you want to be able to sustain success, and our players and coaching staff that we have now and before have done an excellent job of getting us to this point and continue to grow.”

Still, Landreneau knows it’s not about any ranking but what is coming next.

“Our focus is how can we get better and get ourselves ready for a season,” said Landreneau.

Next season is almost here and still is Landreneau, who had a chance to leave McNeese last summer when other programs came looking for a new coach.

Most expected Landreneau to take the best deal and move on like the previous three softball coaches of the Cowgirls had done.

Natalie Poole went to Memphis, Rick Smith to Ole Miss and Joanna Hardin took off for Virginia. So it seemed time for Landreneau to follow.

But he threw them all the ultimate curveball.

“Everybody in the world out there wants to decide what’s best for you,” Landreneau said. “I know what is best for me and my family.”

Right now that means staying at McNeese and trying to finish the job that has been started.

“Can we do something that hasn’t been done before at this university is the goal,” Landreneau continued. “When you want to go down a road that hasn’t been paved you have to be willing to pave it.”

McNeese softball is personal to Landreneau.

“When you help build something you fight harder for it,” he said. “I feel like I have had a big hand in this. It is more than a salary to me.”

It’s also more than a national ranking as well, but both are nice to have too.

Jim Gazzolo is a freelance writer and host of Poke Nation for CBS-Lake Charles.