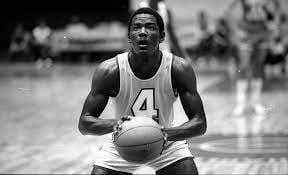 Making up for lost time, McNeese State is set to make Joe Dumars a permanent part of its basketball program.

The University will name the floor of the Legacy Center after its most famous player when the Cowboys next play at home.

On Jan. 5 McNeese will honor its basketball legend in a ceremony on “Joe Dumars Day.”

“I can’t put into words how excited I am to officially name the Legacy Center’s court, Joe Dumars Court,” said McNeese Athletic Director Heath Schroyer. “Joe and I have developed a great relationship over the last few years and it’s truly an honor to be able to do this not only for Joe, but for our fans, community and University.

“Joe is by far the most accomplished basketball player to ever come out of McNeese. However, Joe is more than just an athlete. He’s a leader, a pioneer and has accomplished so much in his professional and personal life. A class act in every way.”

The naming ceremony will come between the men’s and women’s basketball games between the Cowboys and Northwestern State.

“It’s such an honor to come back to Lake Charles for this ceremony,” said Dumars. “McNeese has always been a special place for me. I’m looking forward to the unveiling at the Legacy Center.”

Dumars, the first-round pick of the Detroit Pistons in 1985 and 18th overall, played 14 years for the NBA club. He was part of two championship teams as the Pistons won back-to-back titles in 1989 and 1990.

In the NBA Dumars was a six-time all-star and the Finals MVP when the Pistons swept past the Lakers in four games to win the first title of two straight titles.

Dumars was considered a defensive wizard in the NBA and was known for his battles with the Chicago Bulls’ Michael Jordan.

The Pistons retired Dumars’ No. 4 in the spring of 2000. McNeese had done the same earlier.

Since then he has become a top executive both with Detroit and now the league itself.

On May 2 he was named the Executive Vice President and Head of Basketball Operations of the NBA.

“The naming of our court will allow future generations to know and understand the positive example Joe made to so many,” said Schroyer. “I count be more excited and honored to be the one to do this.”

Jim Gazzolo is a freelance writer who covers McNeese athletics and is the host of Poke Nation on CBS-Lake Charles.